This plane, tail number 42-100591 (#591), was delivered to the USAAF at Mobile Depot on November 6, 1943. She departed for England in 1944 and upon arrival was assigned to the 9th Troop Carrier Command, which was part of the 9th Army Air Force. She was further assigned to the 437th Troop Carrier Group (TCG) and the 84th Troop Carrier Squadron (TCS). The 437th TCG is the ancestor of the 437th Airlift Wing, which is today based at Charleston AFB. You will see the squadron designator “Z8,” of the 84th TCS, in pictures of her from WWII. The 437th TCG and this aircraft (#591) soon took up residence at RAF Ramsbury, which was a 500-acre standard Air Ministry bomber field, which had been built during 1941-1942. It was from RAF Ramsbury that the newly assigned aircraft began to see action and ultimately participated in some of the fiercest battles of WWII.

From Ramsbury the 437th TCG began preparing for the Normandy invasion. On the 437th’s first operation, in support of the Normandy landings, 52 C-47s departed around 2AM with troop carrying Waco (CG-4) gliders containing elements of the 82nd airborne infantry. This aircraft flew in position number 50 for this mission. The gliders were released south of Cherbourg with the object of isolating the western end of the invasion bridgehead, but poor weather and anti-aircraft fire disrupted the formations causing the glider landings to be somewhat scattered. Although #591 did not fly in a follow-up mission from Ramsbury later on the 6th, the 437th flew a third combat mission, on D+1, towing 17 Horsa and 33 Waco gliders carrying reinforcements of troops, antiaircraft pieces, ammunition, rations, and other supplies for 82nd Airborne Division. The 84th squadron contributed 14 aircraft and 42-100591 once again flew in formation position 50. For its work during this period, the 437th TCG was later awarded a Distinguished Unit Citation.

Thanks to the Valiant Air Command website for the historical information.  WWW.VACWARBIRDS.ORG 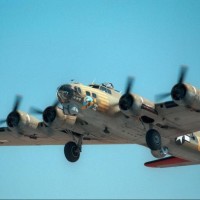